Among “traditional” carmakers, premium brands are leading the way in autonomous vehicle development because safety and convenience have always been key selling points, and such technologies lead to a hefty premium on a car’s price. For some of these manufacturers, the strategy appears to be to first sell and/or use autonomous cars for ride-sharing fleets before more widespread commercialisation. However, some heavyweight players from the Internet world, such as Google, are also taking a keen interest in self-driving vehicles.

Promises for the future

Autonomous cars are generally defined as any car capable of fulfilling the operational and tactical functions of a traditional car but with limited or no human intervention. Proponents of autonomous cars argue that these new vehicles will positively affect the following: 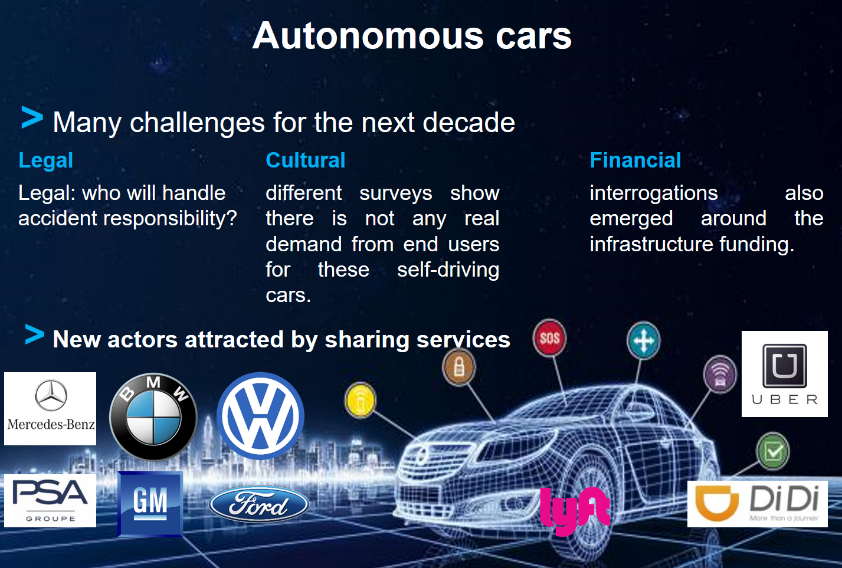 Self-driving cars, also known as “autonomous cars”, are generally defined as any car capable of fulfilling the operational and tactical functions of a traditional car with limited or no human intervention. Specifically, more than steering, braking, accelerating, and monitoring the vehicle and driving environment (operational), a fully autonomous car could act as if it were human by perceiving and responding to events, and performing driving tasks such as lane keeping or turning (tactical).

It is commonly accepted that automation can be broken down into six levels as shown below, based on how an automated driving system performs dynamic driving tasks on a sustained basis. 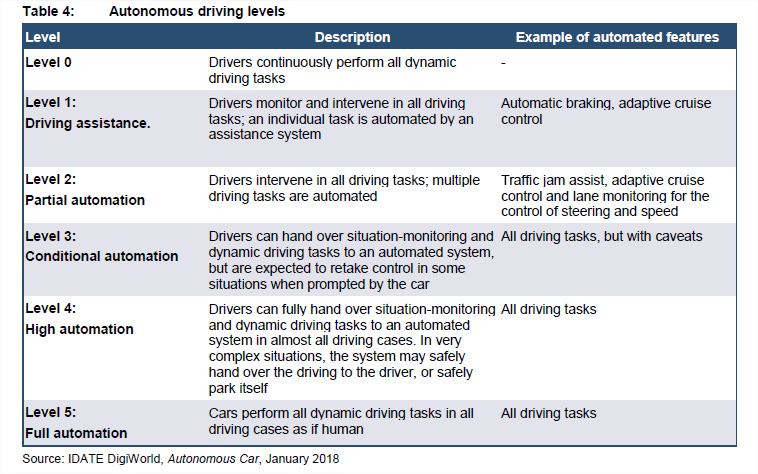 Fully autonomous cars (level 5) are expected to hit the market in the coming years, even though many concerns remain, among both the public and carmakers. In fact, there is disagreement regarding the overall strategy for introducing autonomous driving to the public. Currently, some of the most advanced manufacturers already have level 3 vehicles in their line-up, and many are targeting level 4 or even level 5 in the coming years. Some players are arguing that safety is a concern with level 3 self-driving cars, and that the industry should “leapfrog” directly to higher levels.

Even from a technology standpoint, not all carmakers agree on the best combination of sensors to achieve automation. Although sensors are fundamental for self-driving, connectivity and communication technologies will also be crucial in future self-driving cars. Communication technologies will allow cars to communicate with the outside world and vice-versa, enabling improved navigation and enhancing safety, among other applications.

Some barriers remain but should disappear in the long term 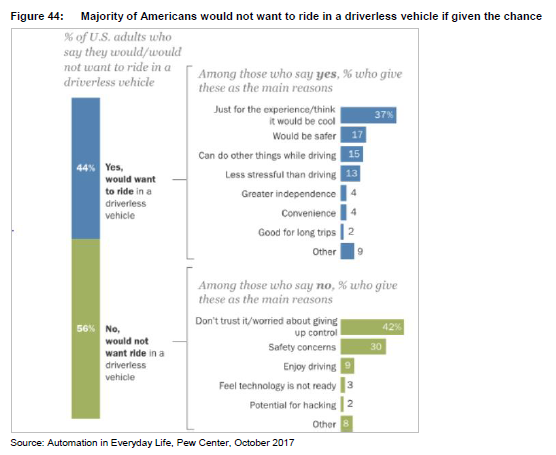 In particular, consumer aversion to driverless vehicles, which is very likely to diminish rapidly (and ultimately almost disappear) if the technology behind self-driving proves to be safer (and more convenient).